The WAVE initiative investigates and designs a seismic and geo-acoustic measurement network in and around and around the Science City Hamburg Bahrenfeld. WAVE is a unique and innovative infrastructure for geophysics, physics and especially for large-scale research facilities.
A key element of WAVE is the widespread use of modern seismic sensors, in particular distributed acoustic sensing (DAS). This technology uses fiber optic cables as sensitive seismic sensors. It enables ground motion data to be recorded at an unprecedented spatial density over long distances, revolutionizing geophysics.

In the workshop we have:

The workshop schedule is detailed here.

In a first step, the WAVE concept has already been tested under realistic conditions to demonstrate the feasibility and possibilities of such a network on site. To this end, the initiative carried out a proof-of-concept experiment on the DESY/UHH campus in Bahrenfeld in May 2021, using, among other things, a 12.6 km long, existing and continuous strand of currently unused telecommunications fiber as a series of seismic sensors. The wave field was recorded at high resolution, with 1 m intervals along the entire length of the fiber. In the following, we summarize the development of this measurement campaign, and present a selection of initial observations.

Map of the DAS-fiber test track, seismometers and geophones.

Map of the fiber test track in the proof of concept experiment at the Bahrenfeld Campus and in the tunnel of EuXFEL (yellow). In the northeast, the fiber runs through the 'Max von Laue' experimental hall and briefly follows the circular path of PETRA there. Other sensors (seismometers and geophones) are also shown on the map as blue triangles. Zoom in for more detail.

Impressions of the measurement campaign. 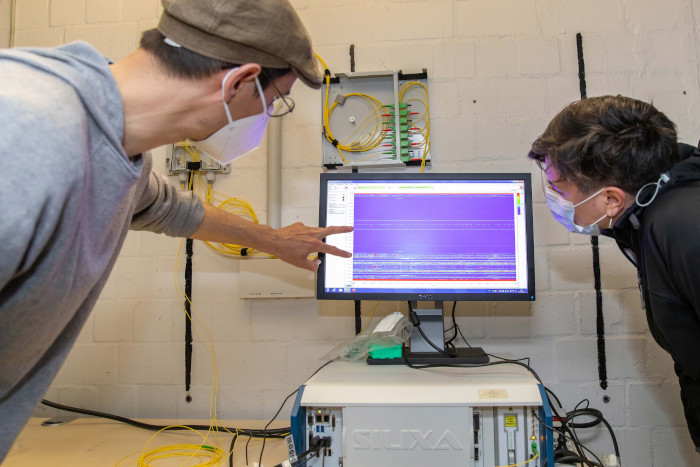 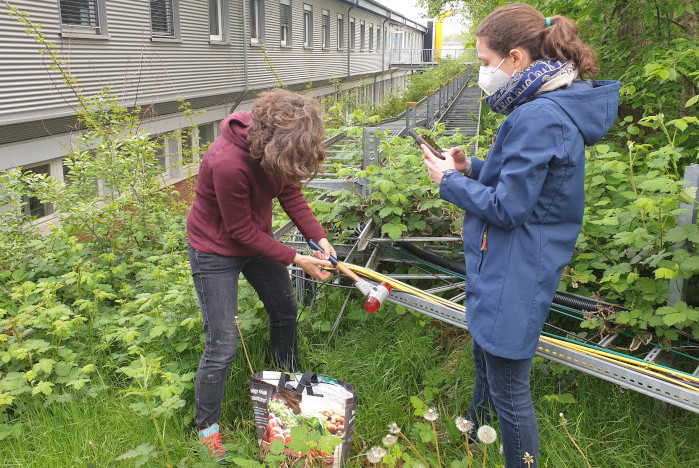 Signals along the DAS fiber. 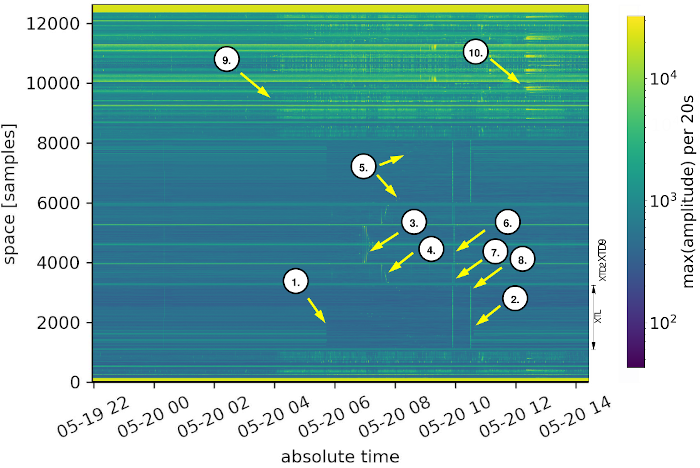 Overview of whole fiber track:
Waterfall diagram of the records of all DAS sensors along the 12.6 km long fiber. The maximum amplitude of the time series at 20 s intervals is color-coded across the spatially distributed sensors and the 16 hour recording period. The arrows mark events that are described in the listing (click for details), numbered accordingly. 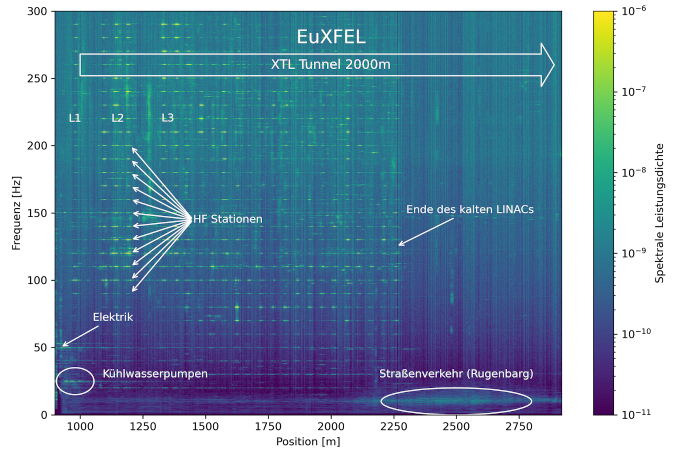 Signals along EuXFEL tunnel:
Spectra of all DAS channels along the accelerator tunnel XTL, during accelerator operation of EuXFEL. Already at first glance, many elements that may cause disturbance or noise can be identified by their characteristic frequencies. Some prominent elements are marked for illustration. 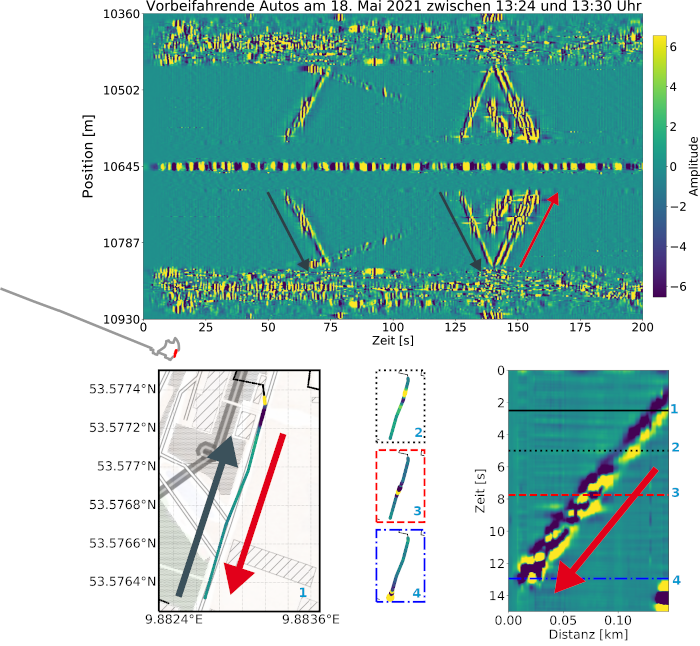 Cars passing the DAS fiber:
Spatiotemporal DAS recording of passing cars is shown at the top. The fiber section between positions 10430 and 10800 is immediately adjacent to a road. A map of the road section is shown at the bottom left. At the bottom right is a recording of the passage of a single car, with horizontal lines framed in appropriate color corresponding to snapshots of the fiber excitation at the bottom center.
Since the fiber passes the road twice in opposite directions, the waterfall diagram is mirrored about the horizontal at a distance of 10645m. The cars are clearly visible as diagonal stripes, and their slope gives immediate information about the speed of the cars (about 18 ± 5km/h). The first car appears at about second 60. Another car travels in the same direction starting at second 125. While the first car crosses a clearly slower road user traveling in the opposite direction towards the end of the road section about 15 seconds later, the second car apparently encounters three other vehicles. One of them leaves its parking place halfway, two others come towards it in close succession.

Animation of car driving along the fiber:
The same section of fiber as shown in the figure on the left. The high amplitudes in the DAS recordings, indicated by yellow color, follows the location of the car. 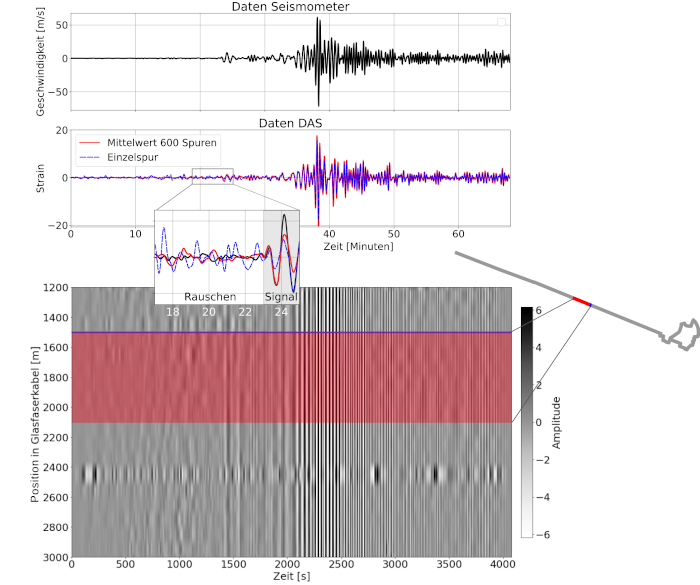 Earthquake in China recorded along the DAS fiber:
Comparison of seismometer data with DAS data. Shown is an earthquake that occurred on 21.05.2021 in Quinghai (China) with a magnitude of 7.4.
It can be seen that the amplitudes of the sum of 600 data traces in the time window in which the earthquake signal arrives are larger than those of the single trace. The amplitudes of the unwanted noise at the beginning of the data track are reduced. In the lowest plot, many DAS data traces are plotted below each other. The blue line marks the single trace shown in the center plot. The red area covers the 600 traces from which the sum trace was formed.
In the lower graph, in addition to the vertical lines corresponding to the coherent seismic wavefronts, spatial variations of the measured oscillation amplitudes can be seen. These may be related to inhomogeneous subsurface structure and illustrate how DAS measurements provide high temporal and spatial resolution.

Animation of Earthquake waves propagating along EuXFEL tunnel:
Propagation of seismic waves caused by a strong earthquake (magnitude 7.4) with epicenter in China through the EuXFEL tunnel.
On the right, a typical representation for DAS data (waterfall diagram) is shown, which color-codes the time series of strain amplitude (y-axis) for each fiber sensor (channel, x-axis). Here, the dark blue color represents compression and light yellow represents elongation of a fiber segment.
On the left, the evolution over time of the strain amplitudes (strain rate) recorded at all DAS sensors is projected onto the fiber track along the EuXFEL tunnel.
Although the length of the waves exceeds that of the tunnel many times over, the spatial shaping of the wave crests and troughs can be clearly recognized as they propagate from East to West. 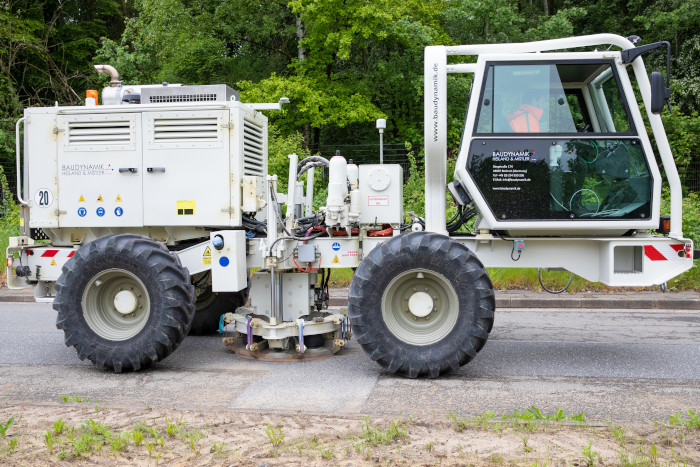 Vibrotruck of the company Baudynamik Heiland & Mistler GmbH exciting the frequency sweep seen on the right. 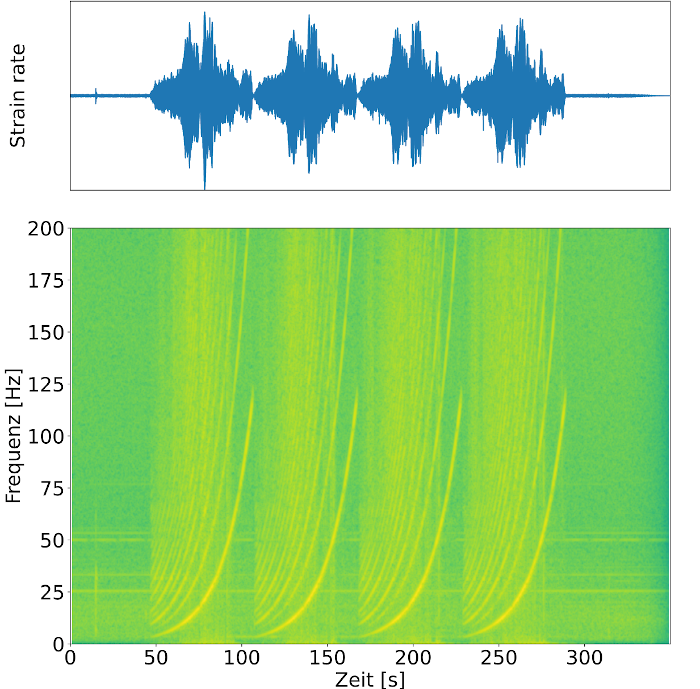 Ground motion excited by the Vibrotruck:
Vibration spectra measured in the accelerator tunnel of EuXFEL very clearly show the ground vibrations that a so-called vibrotruck exerts on the subsurface about 100m away.

Spectrogram of the recordings of a single DAS channel over a period of two hours. An irregular signal in the frequency range around 5.2 Hz can be seen, which affects the experimental operation at PETRA. 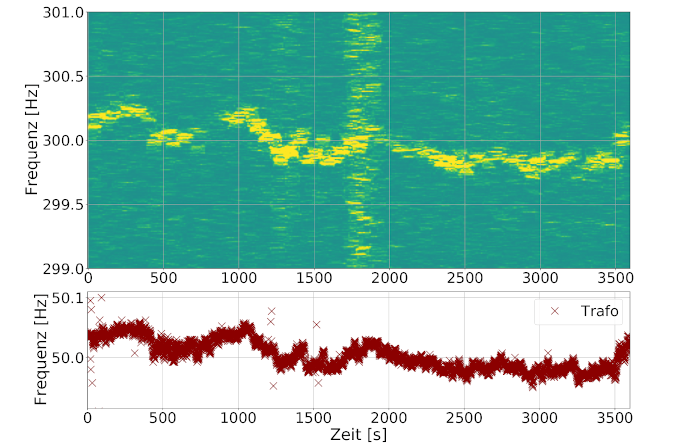 Do you think you can help us with these projects, or do you have ideas of your own? Please contact us! 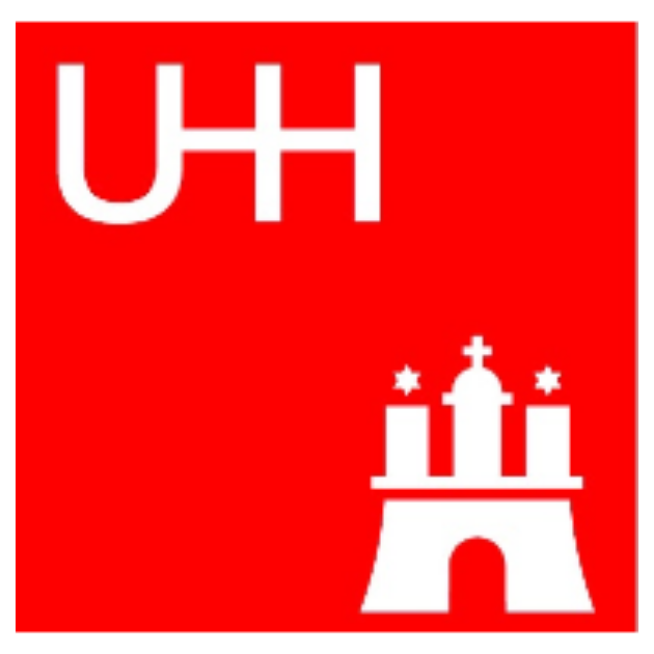 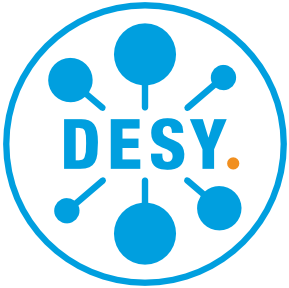 Have we peaked your interest? Would you like to contribute? We meet every second week on Thursday, 16:00 CET via zoom. If you wish to join the team, or get an impression of what we work on, please contact: Prof. Celine Hadziioannou.

The use of the interrogator from the company OptaSense was sponsored by Dean of the MIN Faculty, Prof. Dr. Heinrich Graener. We thank Dr. Martin Karrenbach from OptaSense for on-site advice and service.
We would also like to thank the company Baudynamik and Dr.-Ing. Michael Mistler for the additional excitation with the vibrotruck on campus.
We are very appreciative of the IT group at DESY, in particular Tobias Ladwig, for their support in establishing the fiber connection. We thank the Physnet data center for providing the servers, computing capacity, and data storage, as well as for advice on the architecture for data analysis. We further thank the European XFEL operations team for their support with georeferencing and access to the accelerator.